skip to main | skip to sidebar

Too Busy Visiting Elephants to Blog

I recently traveled to Hope, Maine, as a featured speaker at Hope Elephants, a charity that is caring for two fortysomething Asian elephants retired from an Oklahoma circus. I delivered a talk to an overflow crowd about elephants as urban wildlife in Bangkok, Thailand, and signed my two most recent books for TFCB, Elephant Talk: The Surprising Science of Elephant Communication (2011) and Wild Animal Neighbors: Sharing Our Urban World (2013).

It's been a busy year for Elefolio, with developmental editing projects for various university press clients and individual authors, work on the SEPA-grant funded Biology of Human project, writing museum labels for the interactive Life on Earth project, ongoing podcast support for the Encyclopedia of Life, and writing projects for Lerner's Twenty-First Century Books imprint.

Exploring, and Saving, an Underwater Eden

I had the great good fortune to work with Dr. Gregory Stone of Conservation International and the New England Aquarium and Dr. David Obura of CORDIO East Africa (Coastal Oceans Rearch and Development in the Indian Ocean) on a splendid book, being published by the University of Chicago Press in December. 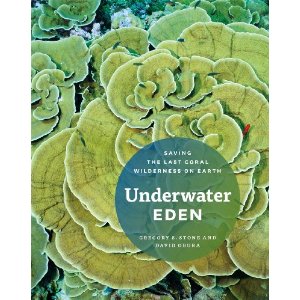 Underwater Eden: Saving the Last Coral Wilderness on Earth details the story of the Phoenix Islands Protected Area, or PIPA. In 1999, dive-boat operators Rob Barrell and Cat Holloway chanced to dive the waters off the remote Phoenix Islands. Located in the middle of the central Pacific, these low-lying coral atolls belong to the island nation of Kiribati. They are home to a tiny settlement of i-Kiribati on the island of Kanton, and hundreds of thousands of nesting seabirds on the island of Rawaki. They have been home to a NASA listening station and an airstrip for PamAm's Clipper service. They may even be the final resting place of aviator Amelia Earhart.

In fact, Barrell's boat had been chartered by a group looking for evidence that Earhart's plane had gone down off Nikumaroro Island in the Phoenix chain. Anchored off Nikumaroro while their charter clients explored the island, Barrell and Holloway decided to dive the reefs. What they saw astonished them: spectacular coral reefs, schooling fish in mind-bloggling numbers, and healthy populations of sharks and invertebrates. Barrell and Holloway were experienced divers, used to seeing spectacular wildlife on charter dives in Fiji. Yet they were totally amazed by the Phoenix Island corals and their wildlife. It was a true underwater wilderness, seemingly untouched by human activity. 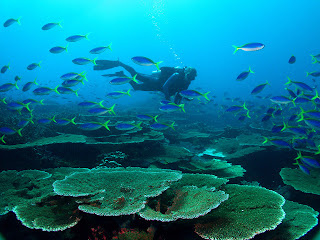 Barrell and Holloway surfaced, exhilarated and stunned by the health and beauty of the Phoenix Islands' reefs. They were convinced they had to act fast to preserve the pristine coral oasis, to prevent it from the overfishing and degradation common throughout the Pacific. They reached out to Stone, then with the New England Aquarium, explaining what they had seen, and inviting him to see it for himself. The result was the first New England Aquarium expedition to the Phoenix Islands in 2000. That first expedition set in motion a chain of events with profound consequences for the Phoenix Islands as well as the people of Kiribati. After additional expeditions in 2002 and 2005, the government of Kiribati moved in 2006 to protect the islands, establishing the Phoenix Islands Protected Area, within which most commercial fishing is banned. PIPA now protects over 408,000 square kilometers of ocean waters, as well as the islands, atolls, and seamounts within its borders.

More expeditions have followed. In 2010 PIPA was declared a UNESCO World Heritage Site, the first marine park to be so designated. Now the establishment of PIPA is sending ripples through the central Pacific. Other island nations are looking to PIPA as a model for their own protected areas, and a chain of new marine wildlife preserves is beginning to dot the map, an expanding oceanscape of hope.

You can read the full story in the participants' own words in Underwater Eden and hear Stone's account in his 2010 TED Talk and follow the latest PIPA news on the Aquarium's PIPA blog.

Listening In, One Species at a Time

An ongoing project here at Elefolio is my work with the fine folks at the Encyclopedia of Life's Learning + Education group and radio host Ari Daniel Shapiro on a series of podcasts, One Species at a Time. Ari hosts the podcasts, which are produced by Atlantic Public Media; I work with the Learning + Education group staff and Ari to provide the Extras you find online.

If you don't know about EOL, it's the brainchild of evolutionary biology and ant man E. O. Wilson (from his 2007 TED talk), to give every species on Earth its own web page, providing easily accessible, authoritative information and images of all living things known to science. 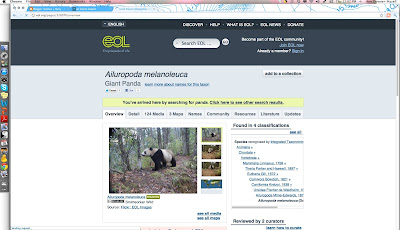 EOL is a consortium of institutions, individual scientists, and ordinary citizens working to document the extraordinary variety and richness of life on our blue planet. It's a project that's highly participatory: average folks, young and old, can contribute based on their level of expertise and ability. Citizen scientists can work to curate a species page, create an online collection or field guide, upload images or video to the EOL Group Flickr Pool, and visit the podcast pages for extras and curriculum links for the classroom. You can also join other citizen scientists on the annual BioBlitz species inventory. Start exploring all EOL has to offer by listening to some of my favorite podcasts from the past (the giant squid and corpse flower) or with this week's entry on killer whales.

Because it's enormous in scope and constantly evolving, it's difficult to do justice to EOL in a blog post. There's always something new. I recommend you dive in via The Learning + Education group's home page. You can also subscribe to the podcasts on iTunes, follow EOL on Facebook, or subscribe to the YouTube channel.

Can Comics Teach Science? Part One

Can comics teach science? Teachers have already recognized the role that comics can play in Language Arts and Social Studies: honing reading skills, drawing in reluctant readers, and telling compelling stories about U.S. and world history, from Maus to Persepolis. Websites like The Graphic Classroom and No Flying, No Tights help teachers and school librarians discover and share comic books and graphic novels for use in the classroom.

But science? Can the complexity of science be squeezed into a speech bubble? And can comics help spark a love of science to last a lifetime and inspire the next generation of scientists, engineers, and citizen-scientists? Teachers, authors, artists, and publishers are coming together to voice a resounding: 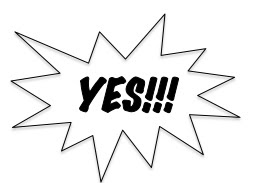 In this first in a series of posts, I'm going to highlight some of the developments coming out of the exciting collision of science and comics. And I mean "collision" in the best possible, supercollidor kind of way: smashing things together at high speed, releasing lots of energy--maybe even bringing entirely new fundamental particles into being. Or at least some fog zombies and stalk-eyed fly pirates.

First up is Sequential SmArt. Coming up May 18 and 19 at Juniata College in Huntingdon, PA, this conference and workshop will explore the use of comics and graphic novels across the curriculum, from kindergarten through college. The final day will explore the use of comics to teach science, and will feature Kevin Kinney of DePauw on using the X-Men to teach about mutation and conference organizer Jay Hosler (Biology, Juniata) on teaching, testing, and creating science comics.

Hosler has created some of the best: Clan Apis about the lives of honey bees, The Sandwalk Adventures (in which Charles Darwin schools some creationist mites living in his eyebrows on evolution), and Optical Allusions (in which Wrinkles the Wonder Brain meets some stalk-eyed fly pirates on his quest to retrieve his employer's missing eyeball).

Funded by an NSF grant, Hosler wrote Optical Allusions (2007) as an experimental biology text for non-majors. He undertook the project in an effort to reverse the downward trend in science literacy. In hilarious fashion, Optical Allusions takes an example frequently cited by creationists in support of intelligent design--the supposedly irreducible complexity of the human eye--and reduces it. Since then, science comics have really begun to come into their own with such acclaimed titles as Nick Abaszis's Laika, about the Cold War canine cosmonaut, also from 2007, and Mark Schultz's The Stuff of Life: A Graphic Guide to Genetics and DNA, with art by Zander Cannon and Kevin Cannon (2009).

So the writers, artists, and publishers are embracing science comics. And they are even making their way onto syllabi and into classrooms. But what about the readers? Do science comics work as comics and as science? Stay tuned for the next exciting installment...

(Full disclosure: Hosler and I worked together on May Berenbaum's book The Earwig's Tail. I was the book's editor and Jay was the illustrator. And I'm a fan. Does it show?)
Posted by Ann Downer-Hazell at 3:22 PM No comments:

Christmas has arrived a little early for Elefolio author and elephant scientist Caitlin O'Connell. Her new book from Lyons Press, An Elephant's Life: An Intimate Portrait from Africa, graces the cover of USA Today as the lead image for their story on books for holiday gift-giving. (Waves trunk at the fine folks at Lyons Press.) 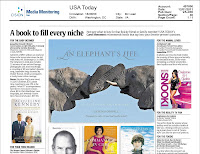 You can see the book trailer for An Elephant's Life here.
Posted by Ann Downer-Hazell at 9:00 AM No comments:

I am happy to welcome to the Elefolio client roster Conservation International. I'd had the privilege and pleasure of working with a number of CI authors on a forthcoming title in the CEMEX Conservation Series published by Earth in Focus Editions. This new project, undertaken with CI directly, will allow me to work with additional dedicated, talented conservation professionals from CI. As they say, it's all good.
Posted by Ann Downer-Hazell at 5:32 AM No comments:

Caitlin O'Connell's An Elephant's Life: An Intimate Portrait from Africa (Lyons Press) will be the first project agented by Elefolio LLC to appear in print. The folks at Globe Pequot have prepared this video for Book Expo America, a.k.a. BEA.

Readers and wildlife enthusiasts everywhere can be grateful that O'Connell has spent twenty years in the heat of the Namibian salt pans, enduring dust in her teeth and in her camera, to bring us these images and the story of what she has learned about elephants, and about herself.

Learn more about O'Connell's work at the Mushara water hole in Etosha National Park at her website.

Look for An Elephant's Life in November 2011, wherever books are sold.
Posted by Ann Downer-Hazell at 10:41 AM 90 comments:

Ann worked at Harvard University Press for 16 years, 9 of those as the editor of such books as Piotr Naskrecki's The Smaller Majority, David Bainbridge's The X in Sex, Kate Jackson's Mean and Lowly Things, and Rosamond Purcell's Egg & Nest. Her travels as a life science editor took her to interesting places: she once spent ten minutes in a playpen with a bunch of tiger cubs, kayaked down the Susquehanna River with 80 arachnologists, and petted John Fowles's cat in his garden at Lyme Regis. She's also the author of five novels and two other books for young readers, published under the name Ann Downer.